Economic harm seems more likely among residents of Europe and North America than in Africa, Asia, Australia, or South America. Respondents from North America to date see 70% of 280 reporting financial harm while residents of Europe to date see 58% of 36 reporting a negative financial impact from the economic downturn. Africa, Asia, Australia, and South America reported 43%, 47%, 42%, and 71% respectively. If leading during economic recovery is different from leading at other times, and residents of Europe and the Americas are more likely to have experienced economic trauma than residents in the rest of the world, then we might expect leadership in Europe and the Americas to look differently than leadership elsewhere as the economic recovery proceeds.

Two somewhat universal themes emerge from research and experience. The first theme is that leaders rise to the surface. People display leadership that is disconnected to the position that they hold. When looking for leaders in organizations, we should not limit our search to people in somewhat traditional positions of leadership. It may be that future holders of positions of leadership come out of the ranks of leaders whose leadership is unrelated to their position. At the moment, these leaders have followers and these followers, rather than organizations or communities, give them power or authority based on the value that they bring.

The second theme is related to this added value. One value that leaders consistently add is a vision for the future that followers find compelling, attractive, and attainable at some level. As much as so many people promote the idea that people are afraid of change, the reality may be that the fear is of specific changes and that certain change is not only tolerable but desired at a visceral level. Leaders communicate a vision for a changed workplace or community or world that a critical mass of followers crave, or at least find positively exciting. 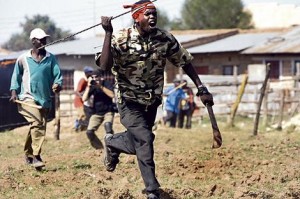 At the risk of stating the obvious, if a person wants to become a leader, and, consequently, wants others to follow her or him, the would-be leader must provide the would-be followers with a reason to follow her or him. Some people label that reason “vision,” a term that has become controversial perhaps through overuse or misunderstanding. Some might be more comfortable with the term “direction” rather than vision; if you want to lead somebody somewhere, most people might consider it reasonable to know where you want to go with them. So, if you want somebody to follow you, having someplace to go is a good starting point.

Having someplace to go is necessary but not entirely sufficient to becoming a leader. The would-be followers eventually need to decide that your chosen destination is interesting, if not desirable, to them. Some leaders need to convince the followers to head in the chosen direction; other leaders may have followers who are more willing. A former pastor of mine was fond of observing that when a crowd is determined to run you out of town get in front and make it look like you are leading a parade! While that is cute, if not humorous, in such a scenario I would argue that the person in front is not the leader but the led. The direction or vision apparently needs to be compelling, if not clear.

The direction does not need a clear or pre-determined path. Since the advent of participative management, leaders seem more inclined to seek input from the followers in determining how to get to the chosen destination. The leader may actually begin to manage a process of determining the appropriate path, including how to overcome obstacles along the way. The leader’s job is to keep everybody moving in the appropriate direction. When the followers are in doubt or disagreement, the followers may look to the leader for guidance. Here, an important distinction seems to emerge – while managers can be imposed on subordinates, leaders lead at the discretion and by the permission of the followers. If followers choose not to follow a would-be leader, the followers are implicitly or explicitly choosing a new leader.

During the past month or so on LinkedIn, a very active discussion continues to unfold about perceived distinctions between leaders and managers. Perhaps coincidently, a significant number of people, some new acquaintances and some long-term colleagues, have asked me how a person becomes a leader. Frequently, the question is more specific: how do I become a leader?

The question is intriguing for a number of reasons.

On one hand, people do not seem to be asking how they can become a manager. Perhaps that is because the person asking the question knows that have studied leadership extensively; however, my longer-term colleagues will also be aware of my study of management and, more specifically, improving management effectiveness, since the late 1970′s. Perhaps my colleagues and acquaintances already have an understanding that a person can learn to be a better manager through a combination of study, experience, and effort.

At the risk of appearing trite, one key to becoming a leader is having followers. Organizational structures seem to take care of providing managers with subordinates, although clearly some managers are more skilled than others at actually managing. Having a managerial title places a person in a position in which they are expected to perform certain and specific managerial duties. Having a managerial position does not inherently make a person a manager; neither does a position, of management or leadership, automatically make the holder of the position a leader. Leaders require followers to lead; perhaps it can be said that followers also require leaders to follow.

It is possible to become a leader, but first you need followers.