You are here: Home / Leadership / After 20 Years, Why Can’t We Still Get Along? 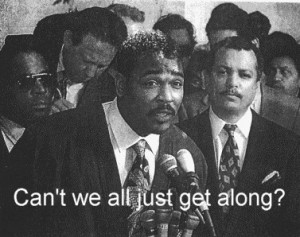 In 1991, news around the United States seemed dominated by news of and riots following Rodney King and the Los Angeles Police Department (LAPD). In the aftermath, Rodney King asked everybody in general and nobody specifically “Why can’t we just get along?” in 2011, the same question still applies, but now to a larger, even global audience. Why does it seem so difficult to co-exist on this planet we each call home?

A popular bumper sticker seems to declare “Co-exist” as if it is possible to simply will it to be. Can we co-exist without getting along? Would that mean agreeing to disagree, letting others maintain their opinions and visions while we maintain or pursue our own? Recently in an interview on CNN, Rodney King noted that people who change things or are the focal point of cultural change become targets, implying coexistence may be at least challenging if we want change. On the other hand, might it not also be the case that coexistence may not be possible without change?

In some contexts, it may be possible to simply decide to co-exist or get along. In other contexts, we might be able to individually start the process, but not complete the process without some cooperation. For us to co-exist, we may need to collaborate on a shared vision for the future and that may require coming together and working together until we reach agreement or consensus on the way forward and how to get there.

If we want to co-exist, we may need to realize that, when we live in community, our ways and our perceived wants and needs are not all there is and may not be the community’s plans or priorities. As much as it may pain some people to realize that their opinion is not shared by others or that, for the majority, their opinion is of little consequence or interest, that may be the reality. We may not have the freedom or the right to impose our will on others any more than they do on us. We are likely to find ourselves in conflict with somebody when we try to do just that and should not be surprised when it happens.

An instructor of mine once objected when a classmate suggested that the golden rule was an appropriate ethical basis for coexistence. The instructor’s argument was that the golden rule suggests that what I believe is right for me implies that the same thing is right for somebody else. If we are to coexist within a society that allows or encourages people to live under non-uniform moral or ethical codes, then maybe when we consider doing unto others as we would want done unto us, at a deeper level, we need an understanding of the other’s values before we can fully appreciate the context and the implications of those decisions. Or, maybe we need to consider that being so open in society that we allow broad diversity in morals and ethics has a cost that may preclude the opportunity to simply coexist.